OnePlus 7T vs iPhone 11: Know Who Wins the Battle of Flagship Smartphones of 2019 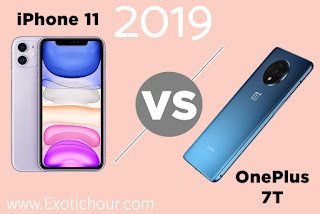 OnePlus has added another new smartphone OnePlus 7T to its portfolio. In OnePlus 7T, the company has given some new features. Some of these features have been taken from OnePlus 7 Pro. Along with this phone, the iPhone 11 is also in full competition, increasing the atmosphere of competition in the flagship offering. Currently, there is stiff competition in these phones of OnePlus and iPhone. This collision will increase further as the festive season begins, because people tend to purchase gadgets at this time. In such a situation, people planning to buy the flagship smartphone will definitely look at these two phones. Know the details of both phones:

OnePlus 7T: OnePlus’s new smartphone has a Waterdrop Notch with a 6.55-inch AMOLED display. Its display comes with a 90Hz refresh rate. The display supports HDR10 +. It also has features like night mode and new reading mode. Fingerprint sensor has been given in its display. In terms of performance, the smartphone has Qualcomm’s latest Snapdragon 855+ processor. With this, 7T has LPDDR4X RAM up to 8GB and 256GB UFS 3.0 storage.

In terms of Camera, the triple rear camera setup has been given in the handset. Its primary camera comes with 48MP Sony IMX586 sensor. The second camera has 12MP and the third, 16MP ultra-wide lens. The camera has 2x zoom and can record 4K video from 60fps to 960fps. The front camera of the phone has a fixed focus and EIS with a 16MP sensor. Macro mode is also given in the camera. OnePlus 7T Pro has increased battery size. It has Warp Charge 30T support with a 3800mAh battery. The company claims that it gets 70 percent charge in just half an hour. The handset works on Oxygen OS based on Android 10. The smartphone comes in two colors Frosted Silver and Glacier Blue. Its 8GB + 128GB model is priced at Rs 37,999 and 8GB + 256GB model is priced at Rs 39,999.


iPhone 11: The successor of the company’s popular phone, iPhone XR, comes with the iPhone 11 Dual Camera. It has a wide and ultra-wide camera. It has features ranging from smart HDR to night mode. Its updated specifications include the Apple A13 Bionic Chip. Along with this, Fast Face ID, long battery life, Fast LTE support and new color options have also been provided in the phone with AI power. The iPhone 11 has a 6.1-inch display with liquid retina. 3 variants of iPhone 11 have been launched in India. Its 64GB storage option is priced at Rs 64,900, 128GB variant is priced at Rs 69,900 and 256GB option is priced at Rs 79,900.

In conclusion, OnePlus 7T is better in terms of specifications and its price is also much lower than the iPhone 11. Its plus point is the 90Hz refresh rate with AMOLED display. However, the iPhone 11 is the best phone in its category. It is ahead of OnePlus in terms of optics. Battery and fast charging once again go in favor of OnePlus, where the iPhone seems a little less than it was initially.

Click here to buy OnePlus 7T and other OnePlus Smartphone