OnePlus 7T and OnePlus 7T Pro will launched in India on 26 September, OnePlus TV will also be Showcased 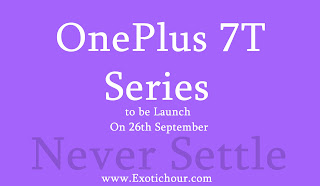 OnePlus 7T has a 6.55-inch AMOLED display with an in-display fingerprint sensor as well. The display is equipped with HDR 10+ and 90Hz refresh rate support. As expected, OnePlus 7T can use Qualcomm Snapdragon 855+ SoC and Adreno 640 GPU for graphics. The phone can have 8 GB RAM and furthermore two storage variants of the phone, one with 128 GB and the other with 256 GB.
OnePlus 7T may have three rear cameras, a 48-megapixel primary sensor with aperture f / 1.6, a 12-megapixel telephoto lens with 2X optical zoom, and a 16-megapixel with 120-degree field-of-view. Will be ultra-wide-angle sensor of. For selfie and video calling, the OnePlus 7T can have a 16 megapixel sensor and a 3,800 mAh battery will work in the phone.

OnePlus 7T Pro can have a 6.65-inch AMOLED display with QHD + resolution. In-display fingerprint sensor support can be provided in the phone for security. Apart from this, the refresh rate will be 90 Hz, plus it can come with HDR 10 + support.

Apple has launched ipod touch 2019 know its Price in India