Facebook-WhatsApp Down, Know about it Now..! 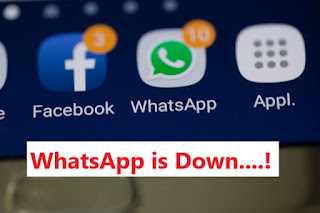 In many places around the world, people are having trouble using WhatsApp. According to the website of Down Detector, Facebook is also having trouble.

Facebook, WhatsApp and Instagram are down in many places around the world. People on Twitter and other social media are tweeting about it. According to the website of Down Detector, people are having difficulty in using WhatsApp since the last 15 minutes and people are complaining about it. Meanwhile Facebook has released a statement. A Facebook spokesperson said that we are working to make things as normal as possible.

In March, Facebook and Instagram had faced the longest interruption. In April, there was a problem with both Apps as well as Whatsapp. The Facebook Messenger app, which is often installed separately, has also been affected.

Users are affected in many places in India as well. Users of Malaysia, Sri Lanka and Indonesia reporting on down detector.

This time people are facing different kinds of problems. Some people are not able to login to Facebook, so some people’s Facebook news feeds are not loading. Similarly, people are getting difficult to send messages in WhatsApp.

People on Twitter are telling their problems on WhatsApp Down and WhatsApp Down hashtags. No such report has been received from Indian users.

At present the company has not said anything about this. This is not the first time that WhatsApp is down, even before that service has been down. But at the same time, an official statement has been issued from Facebook.

Instagram users will get Dark Mode feature support, Know more about it