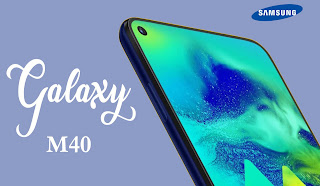 In the year 2019, Samsung launched its two new affordable series Galaxy M and Galaxy A. Under the first series, the company launched the entry-level three smartphones Galaxy M10, Galaxy M20 and Galaxy M30. Now news is coming out that the company can launch the Galaxy M40, the fourth device of this series in India soon.
Several speculation has been made about the fourth phone of the Galaxy M series, and it is expected that in the coming days, this new mobile phone will also get entry into the Indian market. Information about the launch date of the smartphone has also been found.
According to the latest report, the Samsung Galaxy M40 will be launched on June 11. An Infiniti-O display which will be presented with a punch-hole design for front camera. This design flagship is similar to some of the Galaxy S series and Galaxy A series smartphones.
Talking about a rear panel so that the Galaxy M40 can get triple camera on the back, just like we have seen in the Galaxy M30. These three cameras will be aligned vertically and only a fingerprint sensor will be present on the rear panel. Apart from this, the report also revealed that the device will be equipped with snapdragon 675 SoC which will be paired with Adreno 612 GPU. The device is expected to have 6GB of RAM and 128GB storage. It is also being said that the device will work on the One UI of the company based on Android 9 pie and will be equipped with 5000mAh battery.
According to IRAN report, the Galaxy M40 will be launched in India at a price of Rs 25,000. The Galaxy M40 has already been seen on the WiFi Alliance Certification Database and Geekbench listings also reveal many specifications of the device. Galaxy M40 was seen earlier this month on the Geekbatch with the SM-M405F model number and it was revealed that the device will work on Qualcomm Snapdragon 675 mobile platform.

Why is Realme 3 Pro better than Samsung Galaxy M30?